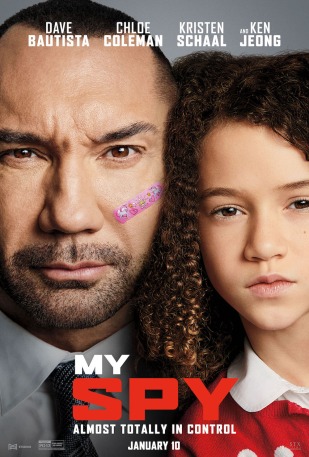 Sometimes you just really need a classic action-comedy to make you smile.

My Spy follows JJ (Dave Bautista), a hardened CIA agent who has just messed up an operation in the field. He’s put on surveillance duty, but finds it hard to keep his distance from the kid (Chloe Coleman) he’s been sent to watch over.

My Spy is exactly the kind of movie I would’ve loved as a kid. It puts nine-year-old Sophie at the centre of the story in a believable way: she’s not an inaccessible prodigy; she’s just like any other sweet, charming kid in need of a friend. As I watched JJ become that friend, I realised I’m always going to be a sucker for the trope of an overgrown muscle-man being revealed as an absolute marshmallow.

It’s not a laugh-a-minute film, but there were definitely some chuckles in the audience. This is a light, fun feature that has something for kids and adults alike.

My Spy releases in Australian cinemas on Thursday, 9 January.

FAM, LOOK WHAT I HAVE MADE. This year, I’ve learnt how to sew. FINALLY. I’m so happy and so proud of myself, and I wanted to share some of the story with you guys. There’s a whole video on my YouTube channel right now that gives a bit of background into what I’m doing and what I’ve learnt. Day 24: #AmpersandFeb20: Make 24 Feb 2020. #scrunchies #sewing #sewingproject
When you open the Italian version of Philosopher’s Stone and remember that Hufflepuff is called Tassofrasso. Day 21: #AmpersandFeb20: Language 21 Feb 2020. #harrypotter #tassofrasso #hufflepuff #bookshelves #shelfie #pinkbooks
MARCH CHALLENGE TIME! 🌿 This month’s challenge hashtag is #AmpersandMarch20. 🌿 A link to the blog post with more info and prompt explanations can be found in my Photo Challenge highlight all month long. 🌿 If you’re really struggling with how to interpret a prompt, feel free to message me with questions and I’ll try to help. 🌿 Please DON’T tag me in your daily photo. If your account is public, just use #AmpersandMarch20 and I’ll be able to see your photo in the mix. 🌿 Please spread the word! Like, share, comment, etc. I can’t wait to see your photos. 🌿 HAVE FUN! 19 Feb 2020. . . . #ampersandfeb20 #marchbookstagramchallenge #bookstagram #bookphotography #bookaholic #ireadya #bookblogger #bookishfeatures #bookchallenge #bookmerch #booknerdigans #booksofinstagram #monthlychallenge #bookchallenge #bookstagramchallenge #aussiereaders #bookstagramaustralia
How often do you use your local library? I’m a massive fan of libraries, and I’ve just posted a new booktube video with tips on how to make the most out of your local library. Click on the link in my profile to visit my channel, or check out my Videos highlights for swipe-up links Day 16: #AmpersandFeb20: #LibraryLover 17 Feb 2020. #library #librarylife #librarylove #pinkbooks #librarybooks #librariesofinstagram